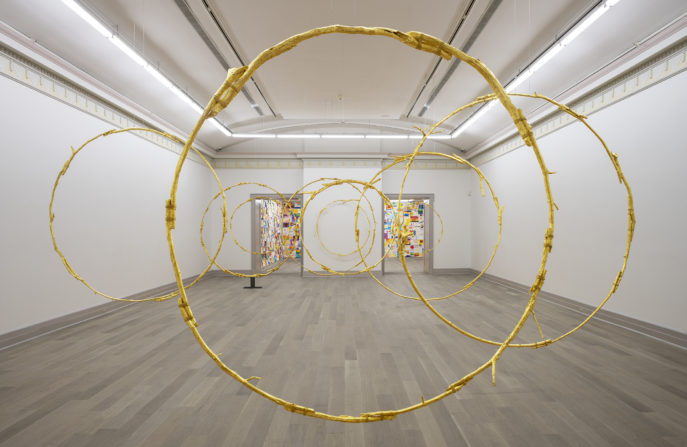 Guild Hall opened in 1931, as one of the first multidisciplinary centers in the country, with a major celebration that included the inauguration of the Moran Gallery named for painter Thomas Moran, and the Woodhouse Gallery named for founder Mary Woodhouse. Early exhibitions focused on the artists and history of the region.

Among its many firsts, Guild Hall began exhibiting photography as a fine art in the 1930s, anticipating the medium’s later acceptance into the wider canon of art history. Guild Hall also mounted early exhibitions of Abstract Expressionism—for example, Jackson Pollock had work hanging in the galleries at the moment of his breakthrough magazine spread in August 1949.

In 1973, Guild Hall was among the earliest institutions in the United States to receive formal accreditation from the American Alliance of Museums. Of the 35,000 museums nationwide, Guild Hall is still one of approximately 1,000 to hold this distinction.

Guild Hall continues to embrace the influx of artists who are drawn to the region because of its history as a fulcrum of the art world. From this creative confluence, the curatorial staff formulates ongoing exhibitions that contribute significantly to art scholarship.

Annually, the Guild Hall mounts eight to ten exhibitions, ranging from the historical to the contemporary, and focusing on artists who have an affiliation with the Hamptons.

Guild Hall’s Permanent Collection houses 2,400 works of art, with an emphasis on the 20th and 21st centuries in all mediums, from painting, sculpture and photography to video, and installation art by artists of the region.

Guild Hall’s museum programs are made possible by the New York State Council on the Arts with the support of the Office of the Governor and the New York State Legislature, an anonymous donor, Peggy J. Amster, Crozier Fine Arts, and funding from The Michael Lynne Museum Endowment, and The Melville Straus Family Endowment