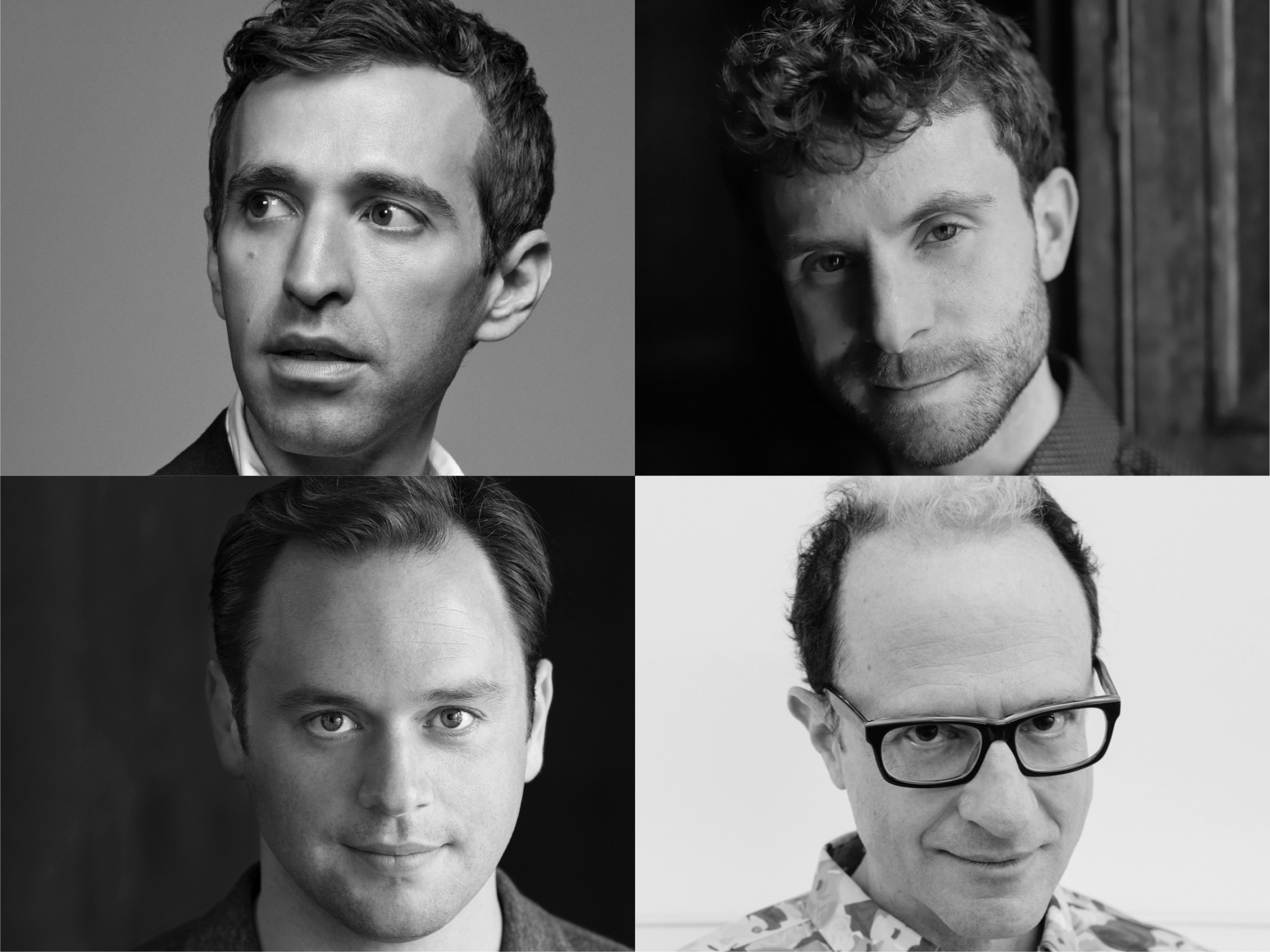 The history of music is full of gorgeous expressions of hidden desires, from Beethoven’s longing for his “immortal beloved” to Tchaikovsky’s tortured expressions of his sexuality. Veils for Desire, an inventive new recital program, is a gathering of music that “veils” or transforms unspeakable desires into new, mysterious forms.

The program includes music by Monteverdi, Matthew Aucoin, and Benjamin Britten, whose Abraham and Isaac, an unforgettable rendering of the Biblical story of a father commanded by God to slay his young son, serves as the program’s heart.

AMOC singers ANTHONY ROTH COSTANZO and PAUL APPLEBY are joined by MATTHEW AUCOIN at the piano, as well as special guest WAYNE KOESTENBAUM, celebrated poet and scholar, whose playful, multi-layered texts – newly written for the occasion – will weave these works together. Join us for this intense, intimate journey!

Music is the ideal art form for the expression of unspeakable, liminal, and forbidden desires. Unlike words or visual images, musical notes do not – cannot – correspond exactly to objects in the world, and musicians have long taken refuge in this essential untranslatability. People suspicious of music’s power – ecclesiastical authorities, for example, or parents of musically rebellious teenagers – have undertaken, time and again, to pin precise meanings to particular harmonies, intervals, and gestures; these efforts inevitably come to seem poignant in their futility: the notion of a particular interval as being “the Devil in music,” for instance, or the idea that playing a Led Zeppelin song backwards might, must, unveil demonic messages. If we’re being honest, musicians and non-musicians alike are powerless to identify or explain the source of music’s cathartic intensity.

This concert program, Veils for Desire, features vocal music which expresses and embodies strange, unnamable desires. The poetic texts that the music brings to life are themselves mysterious and metaphorical, but the music often exceeds or redirects the poetry’s intensity; often, the music gives voice to wilder and stranger feelings than the texts might suggest on the page.

Benjamin Britten’s Abraham and Isaac, which opens the program, is a case in point. There are few religious parables in any tradition as disturbing as this tale of a father commanded by God to murder his young son. Britten’s text, taken from the medieval Chester Mystery Plays, is powerful enough on its own, but the atmosphere of Britten’s musical setting – alternately tender, solemn, and tortured – is not identical with that of the words. Especially at the moment before Abraham – nearly – strikes his son dead, the sheer loveliness of the music is unsettling; in fact, it always makes me feel queasy. What kind of religious transfiguration is this?

In my own music, I’m fascinated by the hidden wells of emotion that an ambiguous text can open up. This Earth is a setting of a passage from Dante’s Purgatorio in which Dante and Virgil, having just emerged from Hell, arrive on the shore of Purgatory – which, in Dante, is a real place on our earth. In preparation for setting foot on holy ground, Virgil washes the soot of Hell off of Dante’s body, and plucks a plant to clothe him. To Dante’s amazement, a new plant magically springs up in the place of the one Virgil plucked. The tender scene of Virgil washing Dante, then this image of fecundity: the whole scene is a kind of awakening, charged with an erotic intensity.

The figure of Orpheus is a recurrent presence on this program, too. Orpheus, a singer of superhuman powers, is a mysterious, double-natured figure in Greek mythology; it’s never quite clear if he’s mortal or divine. I’ve always found the Orpheus story to be an unsettling image for the untrustworthiness of desire: Orpheus pines for his lost wife Eurydice, but as soon as he succeeds in bringing her back from the dead, he loses her. So what was it he longed for in the first place? In this program, we juxtapose Monteverdi’s great aria “Possente spirto,” from the opera L’Orfeo, with two selections from my new opera Eurydice. In the new piece, Orpheus is sung by two singers: a baritone (a role that’s tonight being sung by our tenor, Paul Appleby), and a countertenor. This doubleness of texture reflects the doubleness of his nature, his mortal side and his divine side, both beautiful, neither one to be trusted.

Finally, we are thrilled to welcome a special guest to the AMOC family. The poet and performer Wayne Koestenbaum has for decades been a virtuoso in the art of illuminating the intricacies of human desire, and it’s an honor to have his playful and inquisitive poetic voice as a guide through this veiled musical maze.