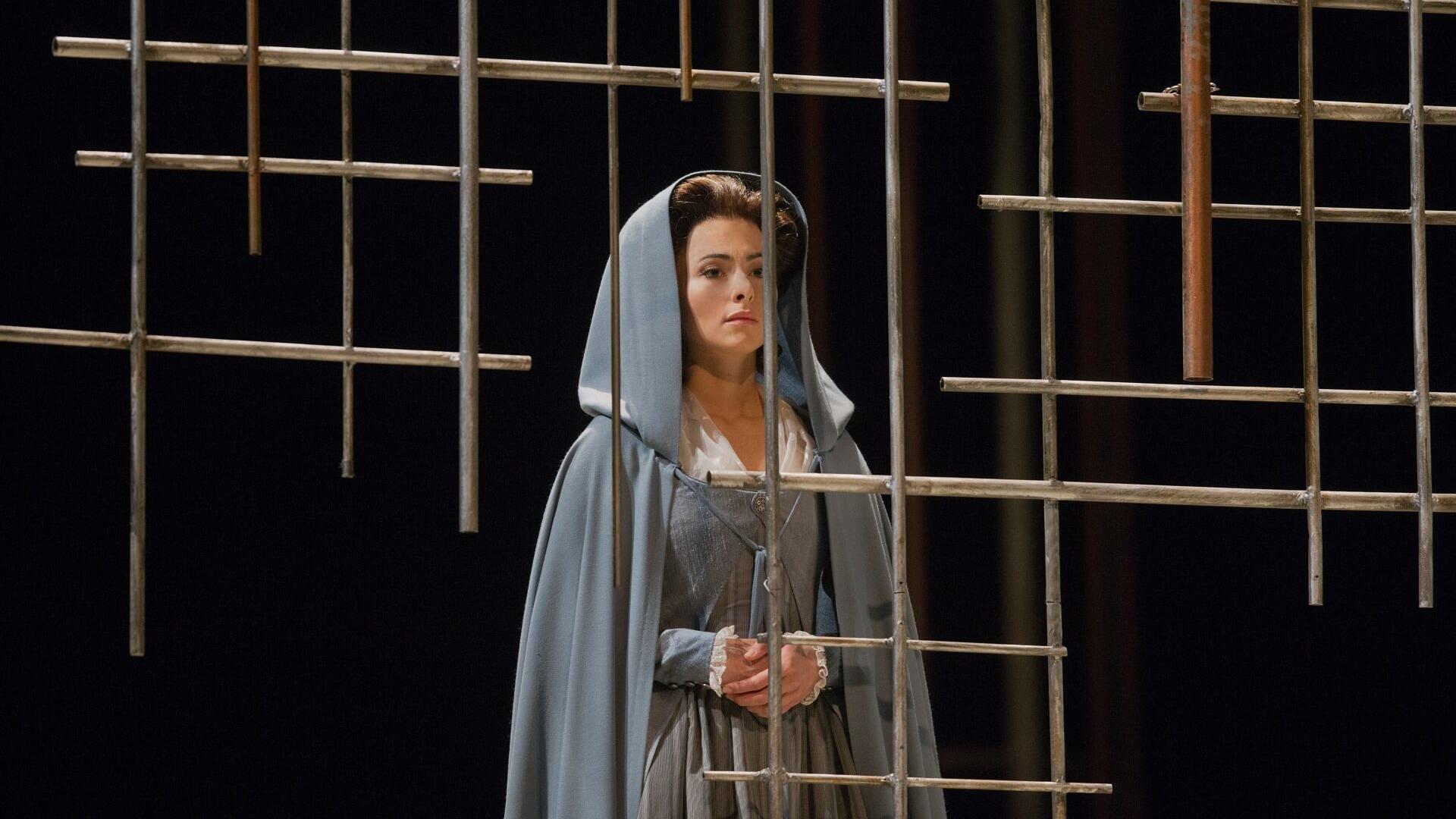 Paris, April 1789. The first signs of the French Revolution are beginning to shake the country. The Marquis de la Force and his son, the Chevalier, are worried about Blanche, the Chevalier’s fearful, nervous sister, whose carriage has been held up by a mob on her way home. When Blanche arrives she makes light of the incident, but her anxiety is revealed when a servant’s shadow frightens her as she leaves the room. Shaken, she returns to tell her father that she has made up her mind to become a nun.

Weeks later at the Carmelite convent in Compiègne, Blanche is interviewed by Madame de Croissy, the aged and ailing prioress, who makes it clear to Blanche that the convent is a house of prayer, not a refuge. The prioress is touched by Blanche’s resolve to embrace her new life.

Blanche and young Sister Constance discuss their fear of death, which Constance claims to have overcome. Blanche admits her envy of her companion’s straightforward and easygoing nature. Constance shocks Blanche by telling her that she knows they will both die young and on the same day.

Madame de Croissy is lying on her deathbed, struggling to appear calm. She blesses Blanche and consigns her, as the youngest member of the order, to the care of the loyal Mère Marie. The prioress confesses her fear in the hour of death, then she falls back lifeless.

That night in the chapel, Constance and Blanche keep vigil by the prioress’s bier. Blanche is overcome by fear and about to run off, when Mère Marie appears. Realizing that Blanche is genuinely afraid she tries to calm her.

Constance hopes that Mère Marie will be the new prioress. She tells Blanche that she wonders why a god-fearing person like Madame de Croissy had to die such an agonizing death. Perhaps, she says, people don’t die for themselves but for others. Someone else will be surprised one day to find death easy.

Madame Lidoine has been appointed the new prioress. In the chapter room, she addresses the convent, counseling patience and humility. A visitor is announced—it is the Chevalier, Blanche’s brother, who is about to flee the country. He urges Blanche to leave the convent and return to their father. Blanche replies that her duty is to her sisters.

In the sacristy, the chaplain, forbidden to perform his duties, celebrates his last mass. The nuns discuss the fear that has grabbed the country and Mère Marie wonders if self-sacrifice will be their destiny. Madame Lidoine reminds them that martyrs are not chosen by their own will, only by God’s. Knocking is heard and the sounds of an angry crowd. Two Commissioners enter and tell the sisters that they have been expelled from the convent. One of them, speaking quietly to Mère Marie, adds he will do what he can to help them get away safely. One of the sisters gives Blanche a figurine of the Christ Child. When revolutionary cries are heard from outside, Blanche nervously drops the figure, breaking it. She is horrified by this omen.

In the devastated chapel, Mère Marie suggests in Madame Lidoine’s absence that they all take a vow of martyrdom by unanimous decision. Noting Blanche’s reaction, the others suspect she will vote against it. When the secret ballot reveals one dissenter, Constance claims it was she and asks to reverse her vote so the vow can proceed. Blanche, afraid to live or to die, runs away. The sisters are led from the convent.

Blanche is forced to work as a servant in the ransacked mansion of her father, who has been sent to the guillotine. Mère Marie finds her there to take her back to the sisters. On the streets, Blanche learns that the nuns have been arrested.

At the Conciergerie prison, Madame Lidoine joins the sisters in their vow of martyrdom. Constance says that she has dreamed of Blanche’s return. A jailer enters and reads the death sentence. Madame Lidoine blesses the sisters. When Mère Marie learns from the chaplain that the nuns will die, she wants to join them, but the chaplain reminds her that it is for God to decide whether or not she will be a martyr.

A crowd has gathered on the Place de la Révolution. The Carmelites walk towards the guillotine, led by Madame Lidoine and singing the Salve Regina. With each stroke of the blade, their voices are cut off one by one, finally leaving only Constance. On her way to the scaffold, she sees Blanche step up from the crowd, take up the chant, and follow her to her death.