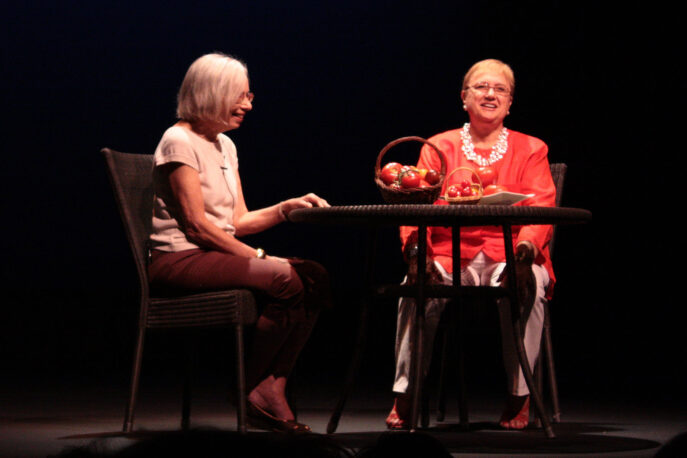 Guild Hall’s Stirring the Pot program is a series of conversations. Though I have some idea of what I’d want to learn and might interest the audience, I often do not know the direction the conversation will take. The session with the chef and restaurateur Lidia Bastianich a few years ago is a good example. In response to the cookie-cutter question of how she began her career, she wound up telling the moving, nerve-wracking story of how she and her family escaped from Communist Yugoslavia to Italy when she was a child. Her father did not make it until years later. And when we did get around to cooking she showed the practical nature of her approach. This recipe, which can be assembled in about the time it takes for a pound of pasta to cook, is a good example. Chicken and zucchini strips in olive oil, bolstered with leeks and herbs and moistened with some of the pasta water are all it takes for an easy supper. Stirring in a dollop of mascarpone is an enrichment I’d suggest to make the simple dish worth a dinner party, a variation that Lidia seconded.

Spaghetti with Chicken and Zucchini
Serves 6

Slice the chicken breasts in 1/2-inch strips on the bias. Season with salt and set aside. Bring a large pot of salted water to a boil for the pasta.

Heat half the oil in a large skillet or sauté pan on medium-high. Add the chicken and cook 2 to 3 minutes, until lightly browned. Remove to a bowl. Reduce the heat to medium and add the remaining oil and the leeks. Saute the leeks until softened but not browned. By now the water should be boiling so you can add the spaghetti to the pot. Stir it once or twice. Add the zucchini to the skillet, season with salt to taste and add the red pepper flakes. Continue cooking until the zucchini has wilted, increase the heat a bit and continue cooking the leeks and zucchini until they start to brown. Return the chicken and any juices to the skillet. Add ½ cup of the pasta water and let simmer.

When the pasta is al dente, drain it, reserving ½ cup of the water. Add the spaghetti to the skillet, drizzle with a little olive oil and add the basil and parsley. Toss the ingredients together, adding a little of the pasta water if needed to keep the ingredients moist but not soupy. Stir in the mascarpone if using. Toss again, add the grated cheese and transfer everything to a warm serving dish or divide among individual plates.