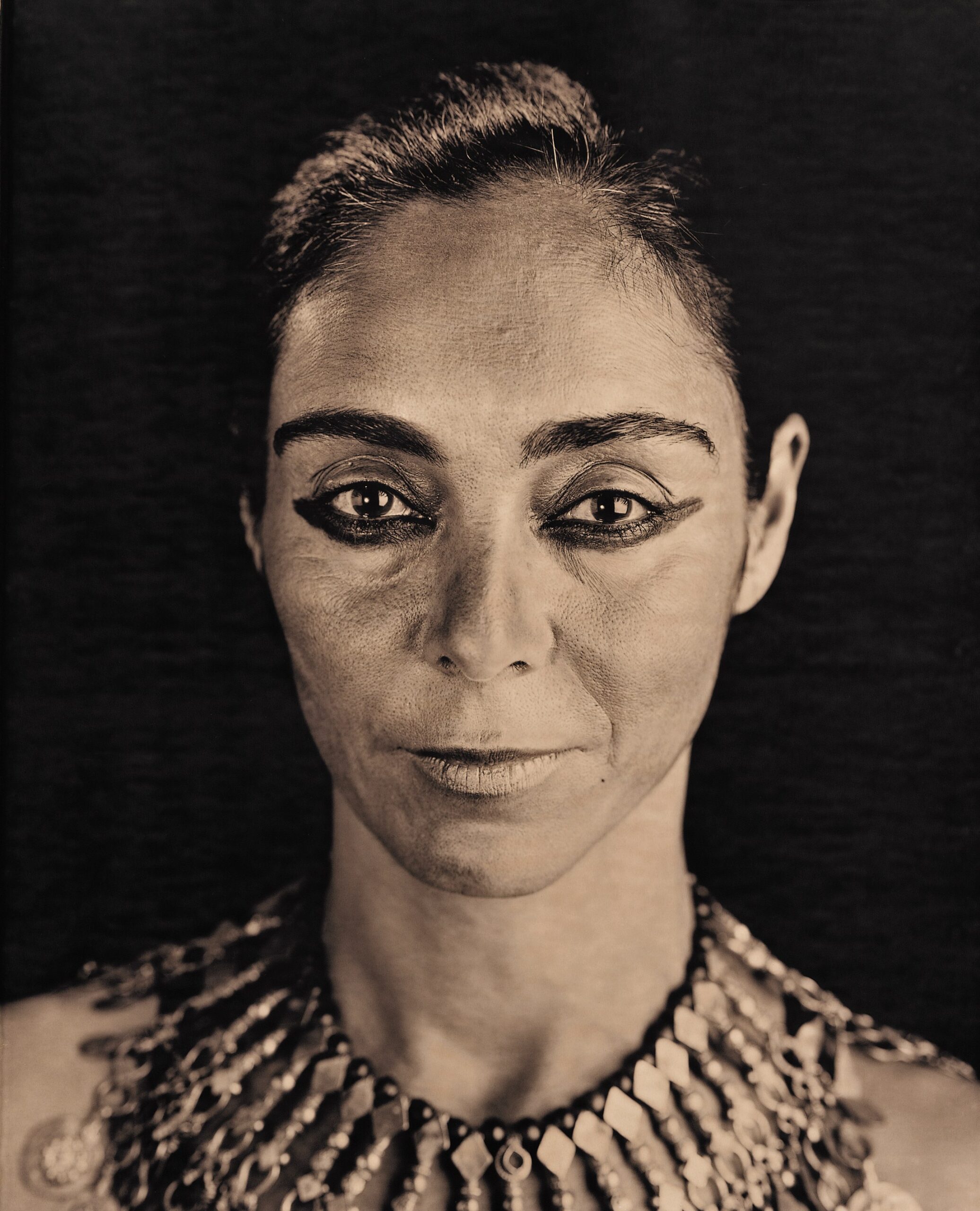 Photo by Lyle Ashton Harris. Courtesy of the artist and CRG Gallery, NY.

It seems only natural that the globally celebrated Iranian-born photographer and filmmaker Shirin Neshat — who has spent a lifetime revealing the injustices between classes and genders, mostly in Islamic societies — would eventually turn her iconic kohl-lined eyes toward the same discrepancies in her adopted home country, the United States.
The result — released earlier this year — is the Land of Dreams exhibition, a poignant and at times satirical two-part video installation on the hopes and desires of America’s marginalized masses, in particular, people of color in New Mexico, one of the poorest states. Neshat, who was named the most important artist of the decade by Huffington Post critic G. Roger Denson, included communities of immigrants (mostly Latino), African-Americans, and the Native American population.
And while she was filming Land of Dreams, Sophie Chahinian of The Artist Profile was filming her.
Now it all comes together at Guild Hall in A Conversation on The Making of Shirin Neshat’s Land of Dreams on Sunday, October 18, at 5:30pm, featuring both Neshat and Chahinian on the John Drew Theater stage, interviewed by Guild Hall’s Executive Director Andrea Grover, recorded with all of the proper COVID-19 protocol in place.
The Making of Shirin Neshat’s Land of Dreams by Sophie Chahinian runs 25 minutes, and is part of the one-hour Guild Hall event, which focusses on Neshat’s life as an immigrant artist, the art world, and how it has changed in the current climate.
“Recently I realized that part of the reason I never worked in America, even though I lived in this country, was that I never assimilated completely . . . as an Iranian-American, I still felt like an outsider,” Neshat admitted during the interview on stage at Guild Hall. “I never allowed myself to make a narrative about America, until today.”
Grover is uniquely positioned as a presenter, not only because of her relationship with Guild Hall, but as the founder of Houston’s Aurora Picture Show when she was only 27.
“Initially, Sophie had wanted to do a profile of Shirin Neshat for The Artist Profile Archive. Instead, Shirin invited her on-location to shoot a behind-the-scenes, making-of documentary. Shirin Neshat is probably one of the most renowned living artists. It was a huge honor to have her at Guild Hall and to interview her,” Grover said.
Chahinian’s film was included as part of the public programming of Neshat’s major exhibition Shirin Neshat: I Will Greet the Sun Again at the Broad Art Museum, October 2019 through Feb. 16, 2020. The documentary provides an alternate perspective on Neshat’s process and intention. Key members of the Land of Dreams film team provide insightful commentary about the personal and political backdrop to the surreal videos as they were being created.
“Shirin Neshat is an artist whose work I have admired for years,” said Guild Hall’s Museum Director Christina Strassfield. “Her use of herself and other female characters in her art as well as behind the scenes in the creation of her films has always fostered an innate feeling of female empowerment. As a first generation Greek-American, I truly could relate to the issues she put forth on immigration, acceptance, and assimilation, and what each of those cost to you as the individual. Her films juxtapose the ethereal and gritty reality of life, and the play between them, as well as the psychological back and forth.”
Of The Artist Profile’s founder, Strassfield added, “Sophie Chahinian is an amazing filmmaker who is doing excellent work documenting artists of every level and letting them speak in their own voice. The films that are part of The Artist Profile Archive will have a lasting effect and be an asset for generations to come. The Making of Shirin Neshat’s Land of Dreams is by far Sophie’s best work. She was able to capture Shirin’s energy and passion and have it come across in her own voice.”
This presentation is the only offering this season from the Hamptons Institute.
Registration is required. The event is free, or attendees can make a donation to support Guild Hall for the premiere. A link will be emailed 24 hours prior to those who register.
After October 18, the event will be available for viewing on Vimeo with a $5 donation.

All Museum Programming supported in part by The Melville Straus Family Endowment, The Michael Lynne Museum Endowment, Crozier Fine Arts, The Lorenzo and Mary Woodhouse Trust, an anonymous donor, and public funds provided by New York State Council on the Arts with the support of Governor Andrew M. Cuomo and the New York State Legislature