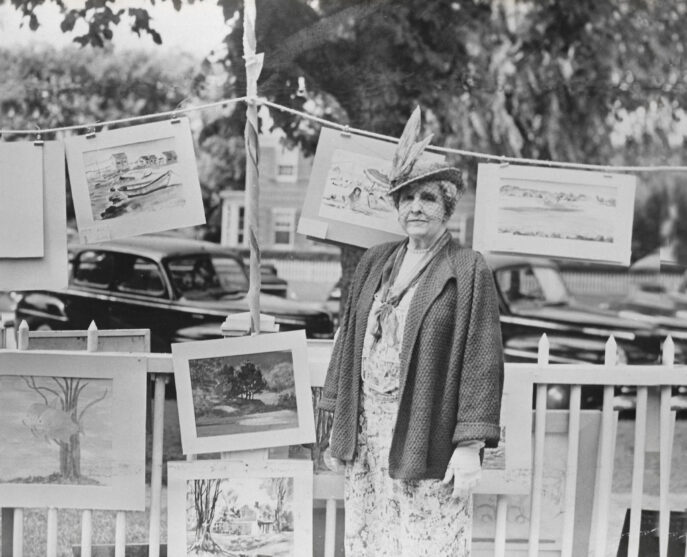 Guild Hall is the cultural heart of the East End: a museum, performing arts, and education center, founded in 1931. We invite everyone to experience the endless possibilities of the arts: to open minds to what art can be; inspire creativity and conversation; and have fun.

Guild Hall opened on August 19, 1931, founded by Mary Woodhouse on the principle that participation in the ARTS creates greater civic engagement.

Guild Hall, one of the first multidisciplinary centers in the country to combine a museum, theater, and education space under one roof, was established in 1931 as a gathering place for community where an appreciation for the arts would serve to encourage greater civic participation. For nearly nine decades, Guild Hall has embraced this open-minded vision and provided a welcoming environment for the public to engage with art exhibitions, performances, and educational offerings. Art and artists have long been the engine of Guild Hall’s activities and the institution continues to find innovative ways to support creativity in everyone.

In 1930, East Hampton resident and philanthropist Mary Woodhouse anonymously dedicated land and an initial financial gift toward building one of the country’s first interdisciplinary centers. Her vision was “to heighten the importance of the arts” and provide a building that would “serve as meeting place.” The community rallied to secure additional funding, as well as manage and oversee the development and maintenance of a new facility.

In August 1931, Guild Hall opened, boasting a jewel-box proscenium theater and fine art galleries. The much-loved institution has been a cultural cornerstone of the Hamptons ever since.

The world-class artistry presented at Guild Hall is uncommon for a small town. Artists such as Jackson Pollock, Lee Krasner, Roy Lichtenstein, Jane Freilicher, Willem de Kooning, and Larry Rivers, among many others, were early exhibitors in the galleries.

Edward Albee, Bob Fosse, Olivia de Havilland, Jerome Robbins, Tennessee Williams, Kurt Vonnegut, and Thornton Wilder were just a few of the accomplished talents to have worked in the John Drew Theater. The Fantasticks became one of Broadway’s most successful shows following a run at Guild Hall, and Nora Ephron and her sister, Delia Ephron, debuted Love, Loss, and What I Wore at Guild Hall before its premiere as an Off-Broadway production.

The tradition of providing a testing ground for artists to make work continues today with the Guild Hall William P. Rayner Artist-in-Residence Program.

“Guild Hall couldn’t have happened just anywhere. It needed the kind of land and seascapes that could seduce artists; it needed a city like New York nearby to nourish it; and, most of all, it needed the dedicated people who make the exemplary cultural center it is today.”
—Enez Whipple, Guild Hall Executive Director from 1943–1991